evo meets Ken Block as he brings Gymkhana Grid to Santa Pod in the UK. His dream car, his views on the WRC, and more 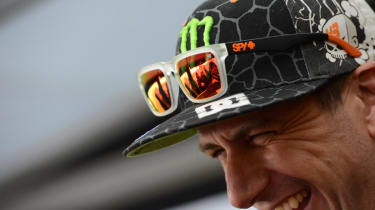 What got you into cars?

I’ve been into motorsport and rallying since I was young, when I first had Hot Wheels, and I’ve always had an appreciation for car design. As I’ve got older I’ve become a product designer, and three-dimensional design is something that appeals to me.

That’s a tough question. I like racecars, so my dream car isn’t necessarily a road car, it’s the one that lets me do what I do the best; a car that I can do Gymkhana, rallycross and rallying in is my dream car. I would say the Group B era of rally cars inspire me most, in particular the Ford RS200. I own an old rallycross car that I’m going to rebuild into a new racing car.

Will we ever see it in a Gymkhana?

Potentially. The way the differentials work in those it probably wouldn’t be a great Gymkhana car, they’re much better at high speed. But it’s a project car when we have the time. Eventually we’ll put it all together and have a nice new racecar!

Who is your driving inspiration?

Colin McRae. He was the biggest inspiration for me to even be a rally driver. The style of driving I do is inspired by his rallying in the 1990s. I met him several times and raced with him at the X Games. One of the biggest moments of my life was pressuring him into rolling his car when I beat him in a head-to-head race, one of the last he ever did. Me and Colin got on well because we just enjoyed playing with the cars, not only racing but going out and having fun with our amazing cars.

We have four X Games next year, in Brazil, Barcelona, LA and Munich. I don’t have a gold medal as of yet so next year I’ve got four more chances to try and get one! I’ll do the rallycross championship in the states, do a couple of WRCs, and a few other things.

What have you found hardest about WRC?

The guys I race against have so much experience reading the roads and writing the notes, something we don’t experience in our national championships in the States. It was the steepest learning curve. You have to drive absolutely on the limits of the notes to be competitive, and if you’re not making great notes, you just can’t keep up with the fast guys.

Where do you think the WRC needs to improve?

It’s quite sad for me to see what’s happening with the WRC. The FIA is a great sanctioning body but rallying needs a really good promoter and it’s unfortunate to see such a good sport lacking in that department. It’s depressing to see WRC not put at the level it deserves.

Seeing companies like Ford have to pull it out is quite a bummer too but it’s not because it’s not a great sport, it’s problems with the economy that’s caused it. It’s unfortunate that some Wall Street people from 2008 are still affecting sports today.

How long does it take to film a Gymkhana video?

The planning, permits and concept normally take around six months. Typically it takes us four days to film so long as everything goes well. It’s the moving of cameras and changing of angles that takes up most of the filming time. The driving is actually the quick part!

How many tyres will you consume?

I average anywhere between 30 and 40 tyres – with Gymkhana 5 we actually went through the least, I did everything quite quickly and only a few things took a number of tries! The better I get at doing it, the less we use up.

Generally we don’t go through many GoPros. I think we destroyed 15 in Gymkhana 5, as someone put an array of them right at the apex of one of the corners. I came too far inside during one try and ran them over.

You seem to like the UK. Will you bring a Gymkhana here?

I’m really happy here doing Gymkhana Grid at the moment, and we have all sorts of ideas of places to film future Gymkhana videos. One of them is the UK, so we’ll see!