Your next car could be just a few clicks away. We've picked just a handful of interesting cars from the evo cars for sale website to whet your appetite... 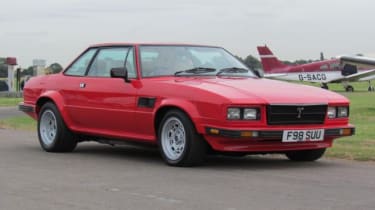 With wide Countach-esque wheel arches, and undeniably angular styling, this very rare De Tomaso is firmly locked in the 1980s, but with that huge 351 Cleveland Ford V8 engine up front (and tough three-speed automatic gearbox), this is a slightly different way to spend £30k.

So, just to prove that you can still find cheap E-types, we have this slightly less than handsome S3 V12 for less than £10k - even after shipping from dry California! Okay, it will need some restoration work, but it could still offer a serious bargain for the right buyer.

Of course at the other end of the spectrum, S3 E-type values have continued to rise. At ten times the price of our bargain basement ‘shed’, this stunning example from Tom Hartley must be one of the nicest Primrose Yellow S3 E-types on the market.   http://forsale.evo.co.uk/car/508b9ba9dec785e128d44c91

For a slice of bargain JDM fun, this 300ZX could be yours for the princely sum of £2495. With just over 100,000 miles, everything still works as it should, and the car has a few upgrades - including lowered coilover suspension and stainless steel rear exhaust boxes. http://forsale.evo.co.uk/car/50938adcdec785e128d45870

Something a bit different, this Turbo R combines effortless push from its 6.8-litre turbocharged V8. Bentley never released official power figures, but expect around the 320bhp mark. Yours for £9250.