Ash Miller is a budding racing driver hoping to make a mark in the UK. evo tracks his progress 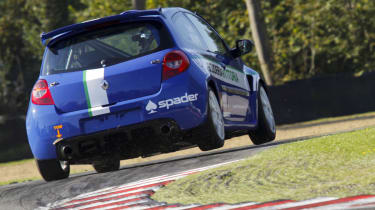 The walls of EVO HQ near Northampton, blanketed in a typically British bout of blinding fog, are about as far from the racy glitz and glamour of Monaco as you could probably find.

Even further away are the sunkissed Brisbane beaches and generally laid-back lifestyle of Australia; a much more familiar place, and the scene I departed at the start of the 2012 racing season.

It’s been a road that started back at the turn of the millennium. A successful kart racer for many years, the next move was to cars and racing a Mazda MX-5. With every race, the more I knew it was my real calling. Racing at the beautifully challenging Bathurst, battling tirelessly on the way to two Australian titles, and through many wins along the way, the feeling of treading that edge just a bit finer than the competition is addictive.

A brief stint endurance racing in a Lotus Elise lead to my international debut in the Renault Clio Cup UK in 2011 - and with a taste of the professional motorsport life I’d always aspired to, I’ve moved to the centre of the motorsport universe.

It’s not an uncommon foreign story, though - every year, the best driving talent turns up to motorsport’s spiritual home – the UK – to take that next step. Some are fortunate enough to have big backers, and go racing with money pretty far from their minds. Many, though, pursue the realisation of their dreams armed with talent, determination, self-belief, and the desire to succeed. They pick up jobs, whether it be race instructing, bar work or otherwise, and put together what they need to survive.

This side’s almost put in the shade by those who have ‘made it’ - but even the likes of fellow countrymen Alan Jones, Daniel Ricciardo and Mark Webber had to struggle from nothing with an arsenal of self-belief and unwavering determination. Must be an Aussie thing.

That said, it’s definitely not easy, and no driver likes to sit outside the car. Lesser one who’s left family, friends, a stable job, and even a 15-year career as a world-ranked Irish Dancer behind (really!) to fulfill the desire to succeed.

For now, I’ve been watching from the sidelines, as fellow drivers and friends take the next step. It’s a genuinely fun and smile-inducing experience seeing them do well, but it’s also a bit like watching your mate run off with the girl you have a colossal crush on.

The challenge to succeed is dizzying, infectious and rewarding. A humbling, thrilling experience, where every little gain is earned. It’s truly living by the skin of your teeth, and I wouldn’t have it any other way, really. The number of friends made, the places gone, the things seen, would have never happened if not for that first step to fulfill the dream. A lot of generous people have helped me get this far, and that really can’t be bought. Besides, nothing quite makes you realise you’re alive like not being totally sure you can afford anything more than pasta, rice and fruit to live off!

The focus for the winter (besides getting used to conditions I’ve only known from sticking my head in a fridge) is staying 110 per cent fit, and pulling together the funding for the upcoming Renault Clio Cup season. That means proving my worth, or more to the point, that my passion and my talent is worth something corporately, in pounds, in return - and that’s a skill in itself.

With a call up from a winning team, the only thing standing between now and the next step is that dreaded word - funding. So for now I sit, coffee in hand, graciously thankful for the chance to put a journalism degree to some use and contribute to EVO, whilst etching away at negotiations for the 2013 season.

I have two people I admire the most - Ayrton Senna and Sir Richard Branson. From them both, I take my cues - persistence, passion, and pure self-belief, with a little luck, a little faith, and a lot of making your own opportunities. This chapter has only just started, and already I feel the balance is in my favour - my aims are squarely focused on endurance racing, and the long term goal of securing victory in the world renowned Le Mans 24 Hours. I’ll never face a greater challenge than getting there, but, I know nothing will taste sweeter than reaching it.