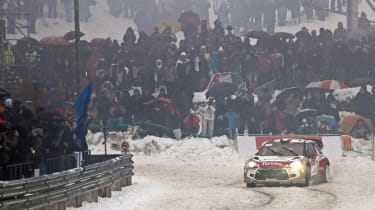 Semi-retired World Rally champion Sebastien Loeb showed the rest of the series that he’s still the boss, dominating the Monte Carlo Rally at the weekend, the first of his four scheduled appearances this year. Citroen ace Loeb won by the best part of two minutes over Volkswagen’s Sebastien Ogier, who impressed as the VW Polo R made its WRC debut. Citroen’s other two factory drivers, Dani Sordo and Mikko Hirvonen finished third and fourth. The rally ended in dramatic style, with treacherous snow-bound conditions on the famous Col du Turini pass claiming several of the front-runners. Evgeny Novikov (M-Sport Ford), Jari-Matti Latvala (VW) and Juho Hanninen (M-Sport Ford) crashed out of third, fifth and seventh respectively over the first pass, leading to the second rally-deciding run after dark on Saturday evening being cancelled. The 2013 Dakar Rally finished in Santiago, Chile at the weekend, with Frenchman Stephane Peterhansel clinching his fifth car-class victory to go with his six wins by bike. The X-Raid Mini driver finished 42 minutes clear of the Qatar-backed buggy of Giniel de Villiers, while the Race2Recovery team of injured servicemen managed to get one of its four entries to the finish. Matthew O’Hare and Philip Gillespie came home 90th and last of those that completed the car class, but their achievement in reaching the finish was one of the stories of the rally. You can read all about the X-Raid and Race2Recovery efforts in the new issue of evo, which hits the shops on January 30. In Formula 1, meanwhile, German Timo Glock has made a shock departure from the Marussia team by mutual consent, after three years with the outfit initially founded as Virgin in 2010. It means the backmarker team now needs to find another driver to partner British rookie Max Chilton, with only two weeks to go until the first pre-season test begins at Jerez in Spain on February 5.

And in the British Touring Car Championship, the eBay Motors (West Surrey Racing) team has resigned Ulsterman Colin Turkington, who won the title with the squad in 2009. Turkington will drive a BMW 125i currently being developed by the team to replace its ageing 320si racers.