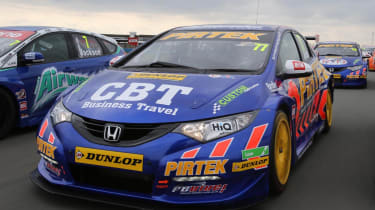 Young British Touring Cars star Andrew Jordan fired a warning to his title rivals by topping the official 2013 pre-season test at Donington Park. The 23-year-old privateer Honda Civic driver, who has just confirmed backing from title sponsor Pirtek for his BTCC challenge until the end of 2015, beat the works MG6 of Jason Plato by 0.071sec around Donington’s 1.957-mile National layout. Reigning BTCC champion Gordon Shedden (factory Honda Civic) was third, with Adam Morgan surprising with fourth place in the Toyota Avensis run by his family Ciceley Racing outfit. Dave Newsham was fifth as he got to grips with his new Speedworks Racing Avensis, ahead of three-time champion Civic-driver Matt Neal, who revealed at the test that he has still not fully recovered from the broken hand he sustained last September. The 2013 British Touring Cars season gets underway on the Brands Hatch Indy circuit next weekend (March 30/31).