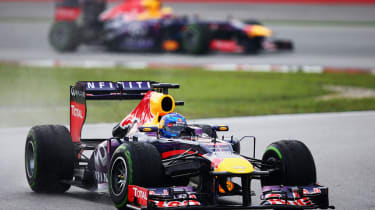 Controversy reigned at the Malaysian Grand Prix after Sebastian Vettel defied Red Bull team orders to pinch the win from aggrieved teammate Mark Webber. The German forced his way past the Australian with 13 laps to go, despite Red Bull officials telling both drivers to hold station, angering both Webber and Red Bull bosses. Vettel later apologised for the move, but now leads the title race by nine points. Lewis Hamilton bagged his first podium for Mercedes with third place ahead of teammate Nico Rosberg, while Fernando Alonso crashed on the second lap after his front wing was damaged by contact with Vettel. Canadian James Hinchcliffe took his first-ever IndyCar win at the first round of the new season at St. Petersburg in Florida, holding off late pressure from Helio Castroneves. Marco Andretti was third, with Justin Wilson the top British finisher in ninth. Four-time champion and evo columnist Dario Franchitti was the first retiree, hitting a wall on lap 18 of 110. Yvan Muller won both races at the World Touring Cars season opener at Monza in his Chevrolet Cruze. New teammate and former BTCC ace Tom Chilton took second and fifth-place finishes, while the Bamboo Engineering Cruze of Alex MacDowall claimed third place in race one. In rallying, former F1 ace Robert Kubica came close to taking his first major event win on Rally Canary Islands, the second round of the European Rally Championship on Gran Canaria. The Pole was leading the asphalt event by over a minute in his Citroen DS3 RRC when he crashed on a downhill second on the tenth of 14 stages. Czech Jan Kopecky (Skoda Fabia) inherited the win ahead of young Irish star Craig Breen (Peugeot 207).