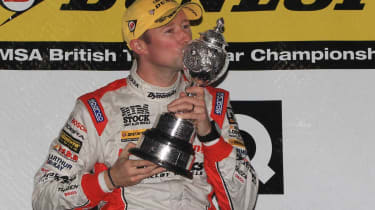 With the first races of the new British Touring Cars season now just three days away, evo asked reigning champion Gordon Shedden about the year ahead as he bids to defend his title:

How would you describe your last 12 months?“It feels like it’s been just as busy over the winter as it was during the season! I still feel like the luckiest boy around to win the championship and I still wake up every morning with a big smile on my face about it.” What’s the biggest strength of your Civic compared to the other cars on the grid?“It’s hard to say. Now more than ever, everyone has just as good an opportunity as us because with the new NGTC rules, everyone basically has the same box of bits. So there’s no excuse for anyone with an NGTC car not to be able to run at our pace.” The Hondas were repeatedly hit with turbo boost restrictions last year, but the range of boost adjustments is being halved for this year. Do you think that will help you?“From a personal point of view, I wouldn’t have any boost adjustments at all. I’d just say that you’re allowed a certain level of horsepower and torque and boost, and then away you go. I don’t see why people should be given an increase in power to compensate for their shortcomings in other areas.” With so many cars set to line up on the grid this season, how hard will it be to qualify or to race up from the back?“It’s going to be a lot harder! If you think back about ten years there were only 12 cars on the grid, and obviously now there’s going to be a lot more hard-fought racing to be done. Having the different option tyres will throw another thing into the mix." Which other driver in the field do you respect the most, and why?“Everyone gets maximum respect from me, because everyone’s here on merit. I’ve just got to worry about my own job.” Who do you think will win this year’s championship, and why?“Me, because I think the number one looks good on my car!”