A 2013 British Touring Cars season preview, as more cars than ever compete for the championship 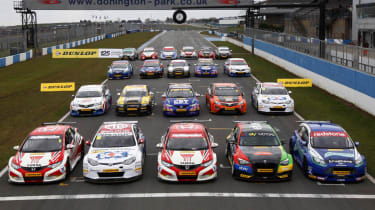 The 2013 British Touring Cars season looks set to be the most open in years, with a record capacity field of 32 competitors set to fight for honours. Last year’s champion Gordon Shedden is back to defend his title in his works Honda Civic, and is again joined in the team by three-time champion and 2012 runner-up Matt Neal. Jason Plato is hoping to challenge again this year, having been able to undertake much more testing in his factory MG6, while 2009 title winner Colin Turkington returns to the series for the first time since taking the crown in eBay Motors’ newly-developed BMW 125i M Sport. Alongside the four champions, reigning Independents title-holder Andrew Jordan (Civic), Mat Jackson (Ford Focus) and Rob Collard (BMW 125i) all harbour title aspirations. Interest in the nation’s premier tin-top series has risen sharply thanks to the full introduction of the latest Next Generation Touring Car (NGTC) regulations for 2013. These mandate the use of several specified parts, including gearboxes, clutches and suspension, as well as tightly controlling the spec of the 2-litre turbocharged engines. This has allowed several smaller outfits to develop their own cars, with 13 different models from 11 different manufacturers entered. Some 25 of this season’s 32 entries will run to NGTC spec, with seven older Super 2000-spec machines competing for their own prize, the Jack Sears Trophy.  The huge size of the field brings its own set of challenges, particularly when it comes to qualifying on the shorter circuits. Shedden explained - ‘It’s going to be much harder to qualify. And when you end up starting races at the back of the grid, it’ll definitely be harder to recover into the points.’ There have been two notable tweaks made to the BTCC regulations this year in an effort to further spice up races and level the playing field. Firstly, the turbo boost adjustment system, where successful cars have their boost limits lowered and struggling cars have theirs raised event-by-event, has been reduced in scope for this year, with the range of adjustments halved compared to 2012.  But perhaps more importantly, each driver will now be given one ‘option’ set of Dunlop soft tyres along with two harder sets for each weekend. Each driver must nominate in which one of the three races they will use the soft rubber, and have to make that choice prior to qualifying the previous day.BTCC series director Alan Gow said - ‘It’ll bring more strategy into each weekend. If you nominate your soft tyres for race two, but it then rains and you can’t use them, tough luck. It’s up to the drivers to plan ahead and make that call, or decide if they want to take a punt.’ The 30-race BTCC season, which features three races at each of ten meetings, will again have its full calendar televised live on ITV 4, with Gow confirming that the series’ current broadcast deal has been extended until at least the end of 2016. The new season begins at Brands Hatch next weekend (March 30/31), with 28 cars expected to contest the opening rounds. Leading contenders