'Rush' is a film about Formula 1's rivalry between James Hunt and Niki Lauda. See the trailer here 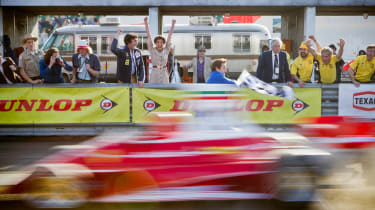 New Formula 1 thriller ‘Rush’ will hit cinema screens in the UK on September 13 2013. The movie focuses on the dramatic rivalry between playboy Brit James Hunt and mechanical prodigy Niki Lauda.  The blockbuster is directed by Ron Howard and written by Frost/Nixon’s Peter Morgan.  Daniel Bruhl, known from Quentin Tarantino’s WW2 escapade Inglorious Basterds, will be playing the role of Lauda, and Thor star Chris Hemsworth will be placing himself in Hunt’s racing shoes. British Touring Cars driver Rob Austin also stars, playing US racer Brett Lunger. Be prepared for lots of sideways 1970s F1 action, and some high velocity driving around the Nurburgring. After the 2011 releases of Senna and TT: Closer to the Edge, it's another reason for petrolheads to head for the cinema. The Rush movie trailer is below.