The modern MG range is set to gain a Nissan Juke rivaling crossover, previewed by the CS concept 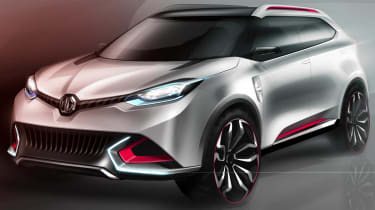 MG will unveil this CS Concept at the 2013 Shanghai motor show. It previews the brand's next model and looks very much like a compact SUV to rival cars like the Skoda Yeti and the Nissan Juke, the Nismo version of which this concept appears to take inspiration from. Being one of the fastest growing segments in the market, it’s no wonder that MG wants to compete in it.   Penned by a design team led by Anthony Williams-Kenny, the CS Concept certainly looks like a modern MG, adopting the same design language first seen with the MG6 saloon and MG3 supermini. The headlights feature a multi-faceted ‘shard’ structure which reflects the light in different colours and shapes from the side and in the same time can form the octagonal shape of MG’s logo from the front.

There is no official info so far about the engine range, but likely candidates would be the 1.8-litre turbocharged four-cylinders from the MG6, a 158bhp petrol unit and a 148bhp diesel. We’ll have to wait until the official unveiling of the concept at Shanghai on April 20 for more details.