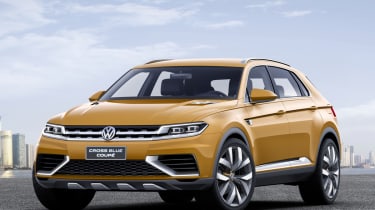 Volkswagen has revealed a new sporty SUV concept, the CrossBlue Coupe, at the Shanghai motor show – showcasing the future direction of the company’s compact SUV. The concept is powered by a turbocharged V6 petrol engine, as well as a plug-in hybrid drivetrain – producing a combined output of 409bhp.

The Coupe concept follows on from the regular CrossBlue concept revealed at the Detroit motor show, and although VW officially says that this CrossBlue Coupe concept won’t make production – it points towards a sportier sub-Toureg SUV to replace the Tiguan in the North American and Chinese markets.

The styling takes obvious influence from the earlier concept, however, the lower roofline and general sportier stance positions the concept against the likes of the BMW X6.

Power is transferred to the road via a six-speed DSG gearbox, giving claimed performance figures of 0-62mph in 5.9secs and a top speed of 146mph. Volkswagen claims the hybrid concept is capable of up to 94mpg.

Based around Volkswagen’s modular MQB platform, the range of engine and transmission options is almost limitless. Even with the heavy batteries and motors associated with hybrid drivetrain, the CrossBlue weighs in at 2220kg.