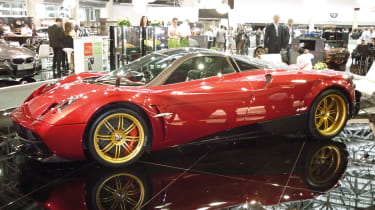 The 2013 Top Marques motor show is the tenth such event to be held at the home of the world’s most famous Grand Prix, Monaco. This picture gallery focuses on the supercars that star at this years event, the pinnacle of production vehicles on display and holding some decorum among the less subtle tuner specials.

From the Pagani Huayra – evo’s 2012 joint Car of the Year – to the little Abarth 500, many premium models sit on the Top Marques stand among displays of caviar, champagne and fine watches. And to many of the show’s wealthy attendees, they’re just as likely to be whipped up in a credit card-melting spending spree. The unique attraction of being able to test drive some models on the Monaco GP circuit (albeit before it’s been completely shut down for motorsport, and therefore still chock-full of traffic) also sets Top Marques apart. Click the pictures to enlarge them, and see Top Marque’s best tuner cars here.