Since production started in 1974, Volkswagen has produced over one million Sciroccos. Details of a new celebratory model and picture gallery here. 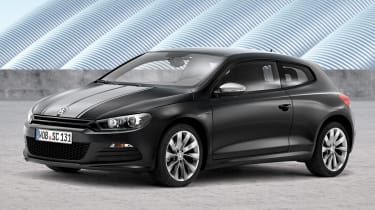 Volkswagen has released a special edition Scirocco ‘Million’ model, to celebrate the recent milestone of producing the one-millionth Volkswagen to carry the Scirocco badge.

The company revived the name in 2006 with a new concept, which went on to form the 2008 Scirocco. Now almost five years old, the current Scirocco has pushed the production total to over one million after a growing production run of 204,350.

To celebrate, VW has launched the ‘Million’, which gets R-line bumpers and bodykit, black leather interior with orange stitching and smoked tail lamps. There are also special ‘Million’ decals and tinted windows, although this special model will only be available in Germany and China.

Enjoy the gallery of Sciroccos old and new below: