Gran Turismo 6 launches on the PS3 on 6 December; review, screenshots and details here 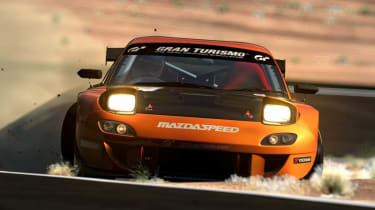 Gran Turismo 6 has been a long time coming. That’s no real shock, as the series is almost notorious for delays as creator Kazunori Yamauchi obsesses over every minor detail. GT6 has made it out in time before Christmas, happily, though for some the decision to stick on the Playstation 3 rather than headline the launch of the new PS4 is disappointing.

It means the game is available to 80 million people as opposed to two million early adopters, so it’s a justified decision, but it does mean a true clash of the titans with the Xbox One’s Forza 5 is quashed. An important point to note is that in contrast to previous hardware changes, games launched on the PS3 can’t be played on its successor.

Expectations should be set accordingly, then. Like a gen2 Porsche 911 facelift rather than an all-new model code, this is a story of evolution and detail tweaks rather than a complete overhaul.

One of the bigger claims is that Gran Turismo is now more accessible for first-time players, a move catalysed by updated driver aids. And, just like in real life, you’ll need to turn them off yourself if you’re feeling nannied.

Doing so reveals the accuracy of GT6’s updated car physics at its highest clarity: the inherent stability of an old-shape Renault Clio 200; the twitchiness of a trail-braked Lotus Elise; the lightning-fast reactions you’ll need to rescue dropping the wheel of a GT3 racing car on the grass. Like we found with Forza 5, there’s a spooky recreation of downforce that eggs you on to drive aero-clad cars faster and faster, felt most authentically at Le Mans 24-hour circuit La Sarthe.

A Goodwood Festival of Speed mode allows runs up the famous hillclimb in classic cars, and with target times to match or beat but disqualification if you leave the tarmac, the tightrope of driving bravely while not binning it in front of the festival crowd is cleverly mimicked.

Friendlier menus and 25 per cent quicker loading times are touted by publisher Polyphony Digital, but there’s clunkiness when you dig beyond the slick new home screen and the ever more accurately rendered circuits ensure you still need patience before races load.

We got the chance to sample the game with a steering wheel and pedal setup as well as a simpler, more traditional joypad. Cost issues are likely to mean most gamers stick with the latter, and in truth it’s the more accessible and fun option, especially as it more easily facilitates two-player battles. There’s appeal to settling down into a mock racing seat and clutching a wheel of course, though the official Gran Turismo Thrustmaster setup we used featured odd self-centring that could initiate a hard-to-recover tankslapper in the wake of collecting up a big slide yourself.

A new circuit creator is among the features, with a GPS mode that allows you to use a smartphone to track your favourite driving road and then let the game recreate the twists and turns. It’s an update feature available in the near future, so we’ve not been able to sample it yet.

GT6 has been painstakingly thought out, a point proved most pertinently by the accurate galaxy of stars that fills the sky during night races, each in its exact placing. It’s easy to assume Yamauchi has an obsession with astronomy as well as cars, as the car roster includes the Lunar Rover, complete with a moon surface rendered using Japanese aeronautic data (from agency JAXA) to drive it on. The new C7 Corvette Stingray graces the cover, while the Mercedes AMG Vision Gran Turismo heads up a list of 28 concept cars created at Yamauchi’s request. There are still no Porsches, mind…

With 1200 cars and 100 track layouts – with monthly updates not far around the corner – longevity is guaranteed. Subjectively GT6 does not exhibit a big leap over GT5, though, and it remains a focused game that never truly allows you to let your hair down and have a giggle. But with a reasonable wait likely before Gran Turismo hits the PS4 – a development of the GT6 platform rather than an all-new Gran Turismo 7 the safest bet – racing simulation fans will still appreciably lap this up and revel in its details.