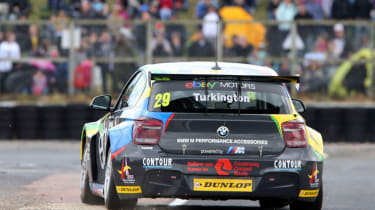 Former British Touring Car champion Colin Turkington has hauled himself into this year’s title race with a commanding display in the latest round at Croft in North Yorkshire.

The Ulsterman made the most of his eBay Motors BMW 125i M Sport, which has gradually improved at each event since breaking cover at the start of the season. Turkington dominated the opening race from pole position, before fending off Gordon Shedden’s Honda Civic to win a second race held through intermittent showers.

Turkington then impressed further by battling his way from eighth to second in the reversed-grid third race, being beaten only by the works Civic of Matt Neal, who has extended his points lead to 19 at the halfway point of the season.

The meeting was, however, a difficult one for Jason Plato. The MG driver finished fifth in the first race, but a gamble on taking wet tyres for race two backfired spectacularly: after leading the early stages, he fell back to 20th place a lap down. A strong recovery drive from 20th to sixth in race three at least salvaged some points for the two-time champion, who is joint third with Shedden in the standings.

Next round - Snetterton, August 3/4