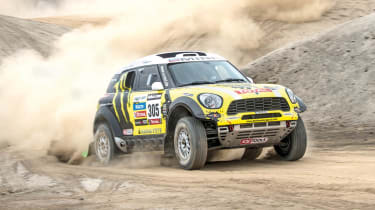 The Dakar rally looks set to gain a high-profile entrant in the coming years. Andre Villas-Boas – manager of Premier League football team Tottenham Hotspur – has revealed his ambition to enter the gruelling race in the next five to ten years.

Villas-Boas – who launched his career in English football with a short tenure managing Chelsea – is known to be a car enthusiast, reportedly owning a BAC Mono. The Mono is an exceedingly-focused, single-seat trackday special which the coach has been seen driving in London.

Aged 35, Villas-Boas – known as AVB – is relatively young for a football manager. He has high hopes for Tottenham in the coming years, but looks equally keen to scratch some petrolhead itches.

AVB told Portuguese newspaper O Jogo – ‘My passion for football makes me live it very intensively over 11 months and dedicate myself to that, but I think life allows you to enjoy other things.

‘For me, there is a limit and, in the next five to 10 years, I will quit coaching. To compete in the Dakar Rally is a lifetime ambition for me and is something I know I have to do. It went from a passion to an obligation, a destination of life, but I can only do it when I leave football. I will do it.’