A new electric sports car, the Bluebird DC50, has been announced - as well as an single-seater racer. Details here 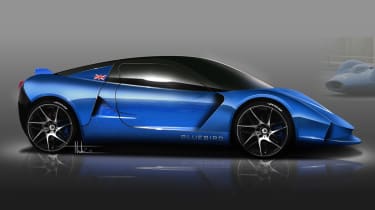 Bluebird, a new company named after the famous Land Speed Record car, has announced that it will release a new sportscar called the DC50, in September.

The DC50 was created to commemorate Donald Campbell’s speed records on land and sea, and will be produced in a limited run of just 50 units. Each car will feature ‘Bluebird blue’ paint and electrically-operated scissor doors.

Its electric motor boasts a power output of 360bhp and has a range of up to 200 miles depending on the specification. Bluebird say that the DC50 will be able to accelerate as fast as a Porsche - suggesting that it will challenge other similarly-priced sports cars on the market. It is hoped that the DC50 will go on sale in 2014.

Bluebird is planning to release the DC50 at the Sustainable MotoExpo event at Beaulieu Motor Museum, alongside an electric racing car known as the GTL. The electric single seater was conceived in conjunction with the FIA’s Formula E-Series, which is set to start next year.