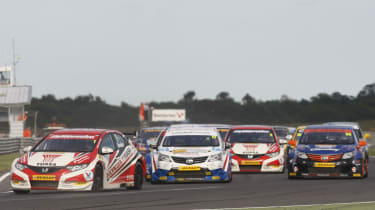 Matt Neal maintained his lead of the British Touring Car Championship after an eventful weekend at Snetterton in which Jason Plato was involved in a spectacular rollover crash. It was Plato’s MG team-mate Sam Tordoff that grabbed the limelight in the first of the day’s three races, dominating from pole position to secure his maiden BTCC victory, with Plato second and defending champion Gordon Shedden third. A spin on the penultimate lap denied Tordoff any chance of another strong result in race two, with the Pirtek Racing Civic of Andrew Jordan making the most of his set of soft tyres to battle past Colin Turkington and claim the victory. Neal came through on the last lap to claim second, ahead of Aron Smith. Race three started off with a spate of accidents on the first lap, the most dramatic of which resulted in Plato being tapped off the track as the pack bunched up, hitting the barriers and rolling over before coming to rest. Plato was unhurt and left his stricken MG6 unaided, but has lost more ground in the title race at a track where he is traditionally strong. Shedden went on to win the race, tapping Turkington wide to take the lead. Mat Jackson finished second and Smith took another third, completing a resurgent weekend for the Airwaves Racing Ford Focus team. Neal leads Jordan by nine points in the standings, with Knockhill in Scotland hosting the next round on August 25.