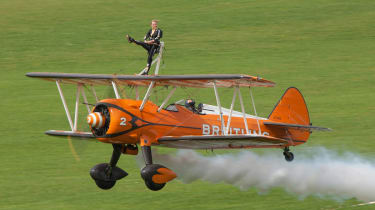 More than 75 historic cars and motorcycles are scheduled to compete on the ‘Racing Runway’ at this year’s inaugural Sywell Classic – Pistons and Props motoring festival – held at Northamptonshire’s Sywell Aerodrome on 28-29 September 2013.

Single seaters, sports cars and saloons will battle it out on the runway to see whose vehicle still has what it takes to win. More action is expected on the ‘Sprint Strip’, normally used by airplanes taxiing to the runway, as Dragsters and motorcycles go head to head on the 200-metre straight-line sprint. Currently, organisers are expecting a Group C Jaguar Le Mans racer, as well as a D-type and a pair on 1992 Benetton Formula 1 cars - as well as many others.

Chipmunks, Be2s, Wilgas, Tiger Moths, Extra 300s and Tomahawks are just a few of the iconic planes that will take to the skies as individual owners and clubs fly into the show. There will also be breathtaking aerial displays from Hangar 11’s Spitfires on Saturday and the Trig Aerobatic Team go airborne with their fast and furious Pitts Special S-1D biplanes on Sunday. The Breitling Wingwalkers, the World's only aerobatic formation wing walking team, will perform all weekend.

Both the Racing Runway and Sprint Strip are open to racing car and motorcycle owners and drivers who are interested in competing. To gain entry and check eligibility of the vehicle, contact David Alderson by email to david@livepromotions.co.uk.