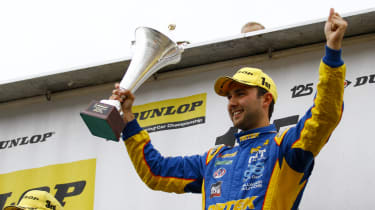 Pirtek Racing ace Andrew Jordan maintained his fantastic form to take two wins from three races at the chilly Rockingham round of the British Touring Cars. It takes him to the top of the BTCC Championship standings with a 30-point lead over Gordon Shedden.

In an incident filled Race One, Andrew Jordan averted danger and converted his fourth-place grid slot into a dominant win, after he charged to the front on the first lap in his Pirtek Honda Civic. Behind him chaos ensued after a string of midfield cars came together, ending the day’s racing early for Dan Welch and Andy Neate.

Race Two saw yet another strong start, but this time for Rob Austin, who managed to maximise the traction of his rear-driven Audi A4 to drag his way past the front row of Mat Jackson (Ford Focus) and Jordan into the lead. Shedden charged through the grid in chase, only to run out of laps before he could turn his strong pace into a serious challenge. This allowed Austin to take a comfortable and well-deserved maiden win, both for himself and his WIX Racing outfit.

In the reverse-grid race three, Jordan took control once again as he managed to convert his pole position into his second dominant win of the day. Once again the midfield provided the incidents, but despite a safety car, Jordan was able to control the race and lead Colin Turkington and Jason Plato across the line.

Jordan now sits firmly at the top of the standings, with previous leader Matt Neal falling to fourth, 34 points off the lead. The penultimate round takes place at Silverstone in Northamptonshire on September 28/29.BTCC standings after 24/30 races