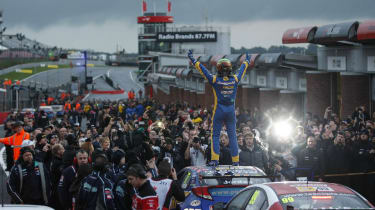 The 24-year-old, driving a Honda Civic for the Pirtek Racing team run by his father Mike, went into the final meeting of the season with a 34-point advantage and a solid fifth place in the first of the three races at Brands seemingly put him in a strong position. But an innocuous collision with Matt Neal’s Civic in race two caused his first (and only) retirement of the whole season due to broken rear suspension, and gave Jason Plato (MG6) a glimmer of hope as he dominated the first two races in dreadful conditions.

Having to fight up from the back of the grid in the finale, Jordan scythed through from 24th place to ninth, enough for him to clinch the crown by seven points from Gordon Shedden (Honda Civic). The Scotsman won race three after withstanding huge pressure from first-time podium finisher Jack Goff (Volkswagen Passat), but Jordan’s recovery meant it wasn’t enough for Shedden to retain his title.

“After race one I was still pretty tense and then the odds were really stacked against us after race two,” said Jordan after clinching the title. “It was my aim at the start of the season to win the title and we’ve done it – it’s just such an emotional feeling. It’s hard to explain – it’s relief but mostly complete joy to have won this as a team. I have felt a lot of pressure these last few weeks but I knew what we had to do.”