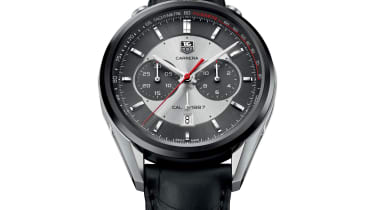 Evo and Octane columnist Simon de Burton will moderate a discussion about the long-standing relationship between the wristwatch and the car on Friday November 8 at Salon QP. The event will trace the history of the 'car watch' from the very first models by Mido in 1918, through to the side-worn drivers' watches by firms such as Cartier, Craftsman and Vacheron Constantin made during the 1920s and '30s, and recall the most valuable motoring watch of all - the one-off Patek Philippe chronograph made for one-time Scuderia Ferrari president Count Felice Trossi and sold in 2008 for more than two million dollars. This year’s 50th anniversaries of two of the best known driver's watches ever made - the Rolex Cosmograph Daytona and the Heuer Carrera - will also be highlighted, as well as the less well known relationship between watches and motorcycles. It’s a chance to also discover what some of the great grand prix drivers of the past wore on their wrists.

SalonQP will run from November 7 to 9 2013 at the Saatchi Gallery in London.

Click here for more information and to buy tickets