McLaren P1 at the Nurburgring, evo Car of the Year 2013: Alfa vs Aston vs Ferrari vs Audi vs Porsche and more, Porsche 911 Club Sport, Caterham Seven 160 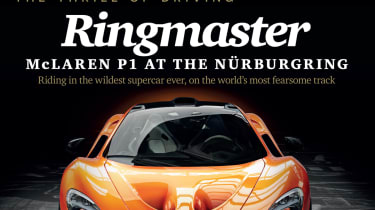 Buy a copy of evo 190 in our online shop

News Lambo has made the world’s priciest supercar, while Harry Metcalfe has plucked his Pagani parka from the evo coat stand for the last time

McLaren P1The Nurburgring Nordschleife is a notoriously tricky test for any car. But a 903bhp hypercar, traditionally an object designed to star on bedroom walls and boast ridiculous 0-60mph times? David Vivian joins McLaren as the P1 takes on the Green Hell and makes its first move against the Porsche 918 and LaFerrari Caterham Seven 160Last month we championed the Caterham 620R, one of the best sports cars on sale. But how much fun remains when the Seven is stripped of its sticky tyres and more horsepower than an entire Golf GTI?

Elfyn EvansIf you were unfailingly patriotic in the Richard Burns and Colin McRae era of the WRC, then it might be time to get the Union Jacks out of the loft at long last. Meet Elfyn Evans, son of Gwyndaf and British rallying’s next big thing

evo Car of the Year 2013The leaves are brown and the clocks have gone back an hour. Rather than recommission your winter coat, though, stay inside and settle into our 40-page eCoty extravaganza. Some 11 cars battle it out, with Ferrari, Alfa Romeo and Porsche among those slugging it out for top honours. And unlike last year, there’s only one winner this time…

Porsche 911 Club SportMeet the lesser-spotted lightweight 911, the 3.2 Club Sport. David Vivian uses it to retell one of his less salubrious driving tales

evo knowledgeThe Audi R8 may be splendiferous, but that doesn’t mean you need to sell several major organs to buy one

Art of speedThe Lexus LFA was uber-cool for multitudinous reasons, but its bewitching dials are right up there

Buy a copy of evo 190 in our online shop