The road-going version of the Sin R1 racing car has made its debut at the Autosport International show. Details here 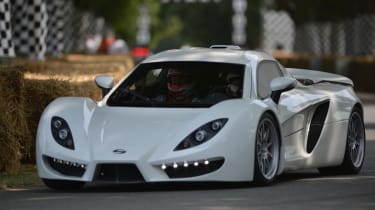 Five months on from making its racing debut in the GT Cup series, the road version of the German-born Sin R1 sports car is close to its full production debut.   Sin has linked up with British firm Tracksport to prepare the lightweight machine, which runs the 7-litre Chevrolet LS7 V8 engine. The R1 is expected to produce 493bhp and 479lb ft with a kerb weight of as little as 1000kg. The firm claims it has interest for purchases from around the world and is hoping to begin delivery of the first models in the spring, at a basic price in the UK of around £72,000.   ‘I wanted to make a car that in driving experience is as close as possible to a go-kart,’ Sin Cars CEO Rosen Daskalov told evo. ‘The idea behind us racing is simply to improve the road car and give it the best performance. The paddle-shift we used on the race car and developed there, for example, has now made it onto the road car. We now have the final version of the body which we will put into production this year, after we had some problems with the quality of the carbonfibre to start with, and we hope within 4-6 weeks it will be ready for full production – we are ready to make five cars a month.’