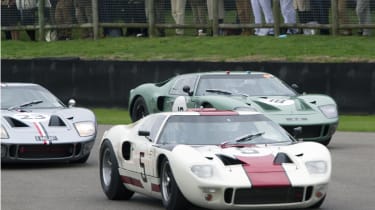 Kenny Brack has a fairly special CV to his name. He’s won the Indy 500 race in the US and survived one of motorsport’s biggest ever accidents. Since September 2013, though, his name yields a smile and some involuntary opposite-lock mimes from anyone with the faintest of motorsport interest thanks to something completely different: his new-found internet fame thanks to an online video from the Goodwood Revival.

Competing in a Ford GT40 in wildly wet conditions, in-car footage published on YouTube shows Kenny driving the car in an almost constant state of sliding, even applying frequent dabs of oppo in close proximity to the pit wall. It’s mesmerising stuff and its appeal doesn’t diminish with repeated views.

As Goodwood launched its 2014 activities, we caught up with Kenny to talk about that video clip (which you can watch above).

What are your thoughts on becoming something of a YouTube celebrity?

That drive was the way it always it is, the only difference being someone put a camera in the car this time and put it on YouTube and it went viral. A lot of people watched it and I guess they enjoyed what they saw, it’s fantastic.

Were you anticipating the car being as much of a handful as it was?

Yeah. All those old cars are like that because they have no grip. Even in the dry you can see how those cars move around and how the driver has to fight to keep control. When you add water to the mix it gets even more slippery, but they are controllable and they are drivable, and it’s real good fun.

Will you return to the Goodwood Revival later this year?

I don’t know. I retired from professional racing a little while ago but I drive maybe one or two races a year. And these things usually don’t come alive until the summertime, somebody thinks ‘oh I’m gonna do Goodwood and I’ll give that guy a call’. I hope I’ll be there in a great car and having some fun, that’s all part of the mix – that you’re in a car where you can hang it out a little bit for the fans to enjoy as well.

Is there any classic racing car in particular you’d like a go in?

Do you drive for pleasure on the road, and if so, what do you have?

I bought a Ferrari 365 a week ago but its not a supercar, it’s something nice to play around with. I used to buy fast cars but I find that it’s very difficult to use them on the road. If you have a vintage car you can drive around at 50mph getting tyre squeal and they are so bad in their performance that you get a good drivers’ experience out of them at a speed which is allowed. If you drive a new Porsche or something you need to drive at 130 or 140mph before you get into the driving experience. But on the circuit you can take those cars to the limit and it’s good fun.