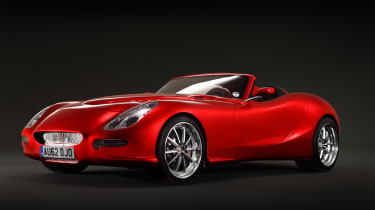 Trident’s new sports car has been revealed. While its price and body style place it among the Porsche 911s, Jaguar F-types and Aston Martin DB9s of this world, it’s a completely different proposition altogether.

As well as its highly limited production and distinctive, almost prototype looks, the new Trident Iceni stands out thanks to its propulsion method. A 6.6-litre V8 turbodiesel engine sits up front, and with the ability to run on biodiesel, Trident claims a very impressive-sounding 2000-mile theoretical range.

Replicating that in real life is likely to prove tough, though, not least becausee of the amount of power on offer. In base spec (£96,000) the Iceni produces 395bhp and 700lb ft, enough for a 3.7sec 0-60 time and 190mph-plus top speed. Trident boasts of clever ‘torque multiplication’ technology which allows the torque figure to take centre stage, with peak performance low down in the rev range and with a 70mph cruise equating to less than 1000rpm.

Several option packs boost performance further; an £11,300 ‘Performance Pack’ ups power and torque to 430bhp and 950lb ft, as well as adding a differential and a rear diffuser, while a £30,875 ‘Track Pack’ takes the peak figures to 660bhp and 1050lb ft while adding carbon ceramic brakes, paddle shifters for the gearbox and Eibach springs to the suspension setup. The brakes are available singularly as a £15,500 option – more than twice the cost of an equivalent setup on a Porsche 911 Turbo.

The Iceni will come in three body styles; the speedster-like sports car is pictured in red, the Magna coupe in black while the forthcoming Venturer estate is illustrated in orange. There’s no word on the potential cost differences between them, but Trident says each can can swallow at least two suitcases to ensure a 2000-mile road trip is realistic.

Trident claims global demand is high and that a waiting list has already built up.