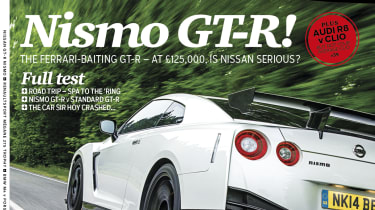 Buy a copy of evo 199 in our online shop

ColumnsBoth Porter and Meaden are spitting feathers about the lack of love lavished on concocting decent car names, while Franchitti recalls his favourite American circuits

LettersWhy the latest Ferrari is not so Speciale, plus which racing car would you most like to own?

Nismo GT-RFor over six years the Nissan GT-R has been the exemplar for supercar-crushing competency on road and track. Yet with the arrival of the significantly stiffer and more expensive Nismo variant, the regular car could be on the verge of looking a bit flaccid. A blast through Europe and some laps of well-worn UK B-roads reveals the state of play

New Megane TrophyAnother evo favourite has been given a hardcore, Nordschleife-focused makeover. The result? A 2-litre hot hatch that negotiates the Green Hell as quickly as the original, 2008 GT-R. We drive Renaultsport’s new 271bhp wonder Aston Vantage N430Aston Martin is no stranger to the Eifel Mountains, and we drive its newest Ring-inspired sports car. Does the latest V8 Vantage’s bite match its luridly striped bark?

Ferrari F40 in the AlpsHenry Catchpole’s search for the world’s greatest driving road heads for alpine passes, with a superlative supercar for company

BMW M4 group testThe BMW M4’s most obvious foes are an ageing Merc and a dodgy Audi. We give it a real test, courtesy of Porsche’s 911 and Nissan’s GT-R, on road in Wales and on track at Anglesey JPS EspritThe Lotus that celebrates the firm’s success in one of the most pivotal seasons in Formula 1 history while wearing one of its most iconic liveries      Long-term testsTwo cars depart the evo Fast Fleet, one farewell triggering a significantly bigger river of tears than the other

evo knowledgeIf the recent football World Cup has inspired you to pay a visit to Brazil, rejoice: there’s somewhere you can go to enjoy your hire car to its fullest (and feed some raccoons while you’re at it)

Art of SpeedThe VW Golf GTI may be one of the most straight-suited hot hatches nowadays, but it – and its striped grille – is the result of a pretty rebellious skunkworks project

Buy a copy of evo 199 in our online shop