Want to see some of the finest cars going under the hammer at RM Auctions London sale? Watch the live coverage here 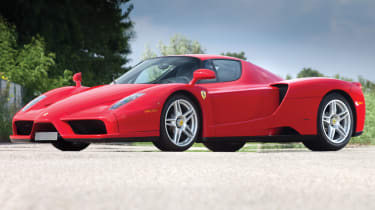 RM Auctions is hosting its annual London auction on 8 September, with a fantastic array of supercars, classics and other interesting lots. Some of the big number cars include a 1956 Ferrari 250 GT Berlinetta Competizione ‘Tour de France’ and a 1964 Shelby 289 Competition Cobra.

The Ferrari 250 TdF is one of just nine ever produced, and when it was new scored some significant race wins. Having been comprehensively restored, and certified by Ferrari Classiche, this example is expected to sell for £4,500,000.

With an estimate of just under £1,500,000, the 1964 Shelby 289 Competition Cobra is a rare Team Specification Cobra, prepared by Shelby and raced as a factory-sponsored entry. It is thought that Carroll Shelby himself got behind the wheel of CSX 2430 at the Texas Can-Am Challenge in the mid-1980s - his last time in a Competition Cobra on track.

Watch the evo TV’s live coverage of the auction at 18:00 GMT on 8 September.