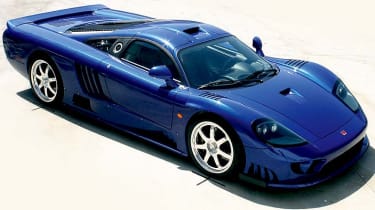 It costs £46,500 on top of the S7's £320,000 list price and boosts the 7-litre twin-turbo V8 to a claimed 1000bhp. Coupled with a relatively light kerbweight of 1338kg, the huge power should allow the S7 to challenge the Bugatti Veyron as the fastest production car in the world. And with 75 examples of the S7 already delivered in the US, the Saleen certainly has every right to claim the title.

Even with the 'cooking' 750bhp engine, the S7 Twin Turbo is said to be good for a sub-three second run to 60mph, and 100mph flashes up in a claimed six seconds flat. Currently Saleen claims a top speed of 240mph for the S7 Twin Turbo but with the 1000bhp upgrade there are whispers that the car has already topped over 260mph in testing. Wonder what it'd do at the N