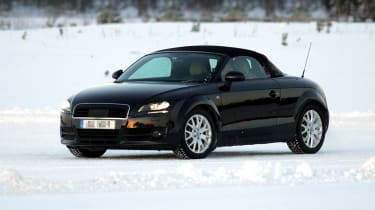 It’s clear the Roadster will mimic the layout of the TT Coupé, and the traditional canvas top will have to do again rather than a folding metal roof. Powered by the same 200- and 250-bhp engines, the Roadster will certainly be one of the fastest roadsters around.

The two body variants known from the first generation TT - coupé and roadster - will be joined by a three-door hatch variant this time, though we expect it's the classic two-door bodystyle that will make up most of the sales. The hatchback estate concept unveiled at the Tokyo Motor Show back in October was first to showcase the TT's new look. Engines for the estate should be the same than for its coupé brother.

That also goes for the “S-Line” design package that will be available soon and is currently tested to the limits in the Austrian Alps. Though the new TT will be looking yet faster with the “S-Line” pack mounted, there won’t be any modifications to the engines - what can you do to those brilliant units Audi has chosen to power the TT?

However, a real TT-S will be coming too, and rumours originally suggested that it would get the VW Group’s 3.2 V6, turbocharged for well over 300 bhp, but it now looks as if it's going to be a little less spectacular. Audi has to go one better than the Golf GTi, however, so whilst the TT-S will have the same 2.0-litre TFSI direct-injection four-cylinder engine, this unit has been developed for 272 bhp. Don't rule out a more potent engine, however; just as the Golf range has included a GTi and an R32, an R32-equivalent for Audi could well be on the way, complete with the 300 bhp-plus output. This could well wear the TT-RS badge...