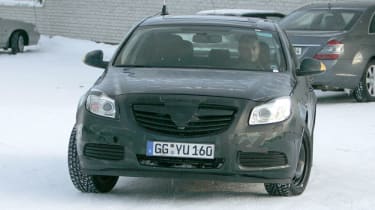 Shot during secret cold-weather testing in the north of Scandinavia, these are the best pictures yet of the all-new Opel Insignia which is to replace the current Vectra by the end of this year! The new Epsilon 2 platform will allow a wider and taller body than currently, which should mean more space inside for passengers – something that's vital in a class where machines such as VW's Passat have really upped standards. The wider stance should also mean an even more composed driving experience.

Almost undisguised for the first time are details of the newcomer's styling, including the Insignia’s headlights and taillights. Obviously, these details will follow the Astra and Antara SUV with a bold front end and a radical fastback profile. A higher-quality cabin will also be key to keeping the new model on terms with its rivals. And it's inside that the new Insignia will make the biggest leaps over the existing car. Flagship Insignias will get a system called Traffic Assist, which has an array of lasers and video cameras that scan the road ahead for warning signs, lane markings and other traffic – meaning the Opel will be the world's first 'driverless' car.

Another first will be the arrival of a 4WD version, while the wider engine range will include a 200bhp 2.7-litre V6 turbodiesel, plus a development of the 2.8 V6 petrol. On sale in late 2008, the new Insignia should debut at the Geneva Motor Show next month.