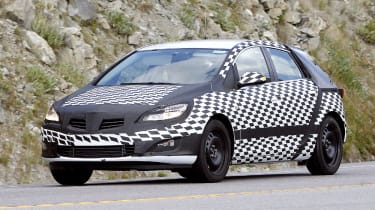 While a bit of camouflage has been removed from the exterior of the Astra since we last saw it, the bigger news lies in the first photos of the interior we managed to snag. Despite the car’s irritating disguising, the new profile, the front fascia and the massive rear bumper with the parted taillights are yet visible. While we can’t say anything to the shape of the three-door model yet, it seems to be clear the five-door version will again get the current model’s sloping roof line plus the trapezoidal-shaped c-post. All in all, however, the new car looks somewhat sleeker and yet more elegant. The Astra also seems to have very interesting headlight clusters with a jewelled arrangement at the top of the housing. We aren't yet sure if these are in fact LED daytime running lights.

On the inside, we can see this particular prototype is a 6-speed Opel. Buttons for 3-stage, heated seats are visible towards the bottom of the centre stack. What caught our eye even more are two buttons on the top of the centre stack. One on the right reads 'Tour' and the one on the left reads 'Sport'. While an adaptive suspension seems like a pricey feature for such a low cost car, those buttons may very well control such a system.

Besides the 5-door model pictured here, Opel has an estate, a convertible and the 3-door in the pipeline, all following the 5-door's introduction, one by one. The engine range will be similar to that used in today’s cars, but we do expect greener engines to arrive shortly after the car’s introduction in about one year. The new Astra will debut at the 2009 Frankfurt Auto Show.