For the first time ever, we just photographed Volkswagen's newest compact... 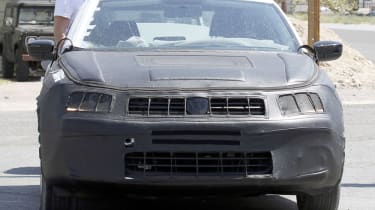 Internally known as NCS – or New Compact Saloon – this updated Jetta will be built on a re-engineered fifth generation Jetta platform. Publications have also referred to as the Jetta VI.

The Jetta name will likely be carried over, and assembly will continue to take place at Volkswagen's Puebla, Mexico, plant, but the new Jetta will measure in slightly longer and a bit wider. Volkswagen plans to sell 160.000 units annually as it hopes to convert some potential Corolla and Civic buyers with it's lower base price.

Although cost-cutting measures may be obvious as compared to the current Jetta, there is speculation that an AWD option may be offered.

Production is expected to start in the 4th quarter of 2010, making this updated entry a 2011 model when it crosses the border.