Nissan has been named the title marque at the historic racing festival taking place in April at the Road Atlanta race circuit. 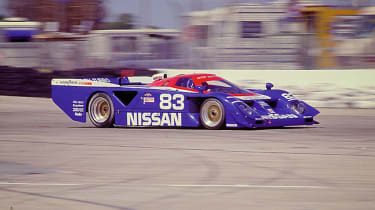 Nissan has been announced as the feature manufacturer for the 2018 Classic Motorsports Mitty festival which will be held at Road Atlanta over the last weekend of April. In celebration of its past motorsport triumphs, Nissan is presenting a collection of its most successful race cars, spanning three decades, at Historic Sportscar Racing’s vintage festival.

Many of the decorated cars Nissan will display were driven to victory by Stuart Morton, who will oversee the weekend's racing action as grand marshall. His four Sports Car Club of America titles were split across two disciplines – the Under 2.5-litre Trans-Am series and C-Production championships, where he drove the BRE Datsun 510 and BRE Datsun 240Z respectively, both of which will be in attendance.

Arguably the crowning car of Nissan’s exhibition, a former IMSA entry, will be a GTP ZX-Turbo. It went toe-to-toe with Porsche’s 962 during the ’80s and ’90s, claiming three IMSA constructors titles between 1989 and 1991, powered by a 3-litre turbocharged V6 that developed 641bhp and 506lb ft of torque – enough to outpunch the famous Porsche.

The list of past Nissan motorsport entrants doesn't stop there, however: a 1995 300SX SMZ and 1990 PPG Indy car series pace car complete the band of Nissans set to be shown at the 41st Mitty festival.

Speaking ahead of the festival, Morton said: ‘Road Atlanta is right up there with the best road racing tracks in the country, so I’m pleased to be honoured in this way. Nissan has a tremendous racing heritage that goes back even before BRE, but it really blossomed under BRE in 1970 and continued through the GTP era. Nissan has a tremendous amount of racing credibility. An awful lot of people still support Nissan and Datsun in racing today, and most of that enthusiasm goes back 50 years.’