The current GT-R doesn’t quite cut it as a supercar, but this Nissan certainly did 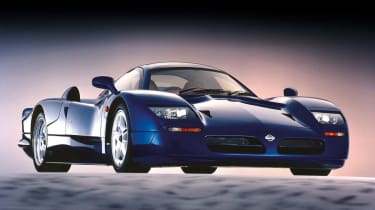 Comfortably as the GT-R sits on pole in any grid of Nissan’s fastest cars from the past ten years, it isn’t the fastest Nissan road car ever. The R390 GT1 is.

Back in the mid-1990s, Nissan’s motorsport arm, Nismo, needed a new contender for sportscar racing – and that meant building a roadgoing version to satisfy the regulations. Good news for supercar fans…

Unlike most other GT1 projects with designs on Le Mans, Nissan built the road car necessary for homologation first and developed the racer from it. The work of Ian Callum, now design boss at Jaguar, and Tom Walkinshaw Racing, the R390 GT1 bore a certain resemblance to the Walkinshaw-built (but Peter Stevens styled) Jaguar XJR-15 but looked none the worse for that.

It was powered by Nissan’s VRH35L twin-turbo 3.5-litre V8, fed by electronic sequential port fuel injection, developing 550bhp at 6800rpm while still complying with all European market exhaust gas regulations. With the assistance of a launch control system and traction control, the R390 GT1 could hit 60mph from rest in under 4 seconds.

Underneath the all-carbonfibre structure was double wishbones all round, inboard dampers and front and rear anti-roll bars. Braking was handled by huge AP 14in vented front and rear disc brakes with six-piston calipers and ABS. Inside, the short-throw gear lever for the Xtrac six-speed sequential gearbox and tiny racing steering wheel were reminders of the close alliance between the road car and the racer.

Only two road R390s were built, along with eight racers. In competition, the R390 was up against the likes of the Porsche GT1, and the 1998 Le Mans would be its finest hour (all 24 of them), capturing four out of the top ten spots, including third just behind the GT1s.