Which is faster - the Nissan GT-R supercoupe or the BMW M5 supersaloon? Track battle video here 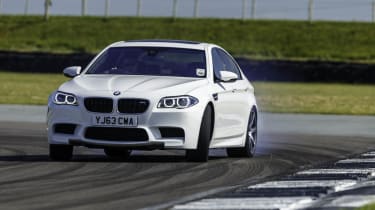 Nissan GT-R v BMW M5 Competition Pack. This is a pairing you wouldn’t normally see together on track, but with these very different performance car legends coming in at roughly £80k, we find out how they stack up against each other on track at the Anglesey circuit in north Wales.

The BMW M5 has been one of the best super saloons on the market since this latest generation was launched back in 2011. Since then it has been facelifted, and is now available with the more track-friendly Competition Pack. This also sees power from its 4.4-litre twin turbo V8 rise by 15bhp from standard, to 567bhp, with slightly lowered and stiffened suspension. With power going to the rear wheels via a seven-speed dual clutch transmission, it’s a surprisingly fun package.

Nissan’s GT-R is a rather different proposition, with the 2014 model year version producing slightly less power than the M5 at 542bhp. It does make up for it however, thanks to its clever four-wheel drive system, which should help to even the scores. Although the GT-R isn’t known for being lightweight, it still comes in at 1740kg – that’s 200 kilos less than the big BMW.

Our tame racing driver on track is Marino Franchitti, winner of this year’s 12 Hours of Sebring race back in March. He sets the lap times then talks us through the intricacies of each car’s fast lap.