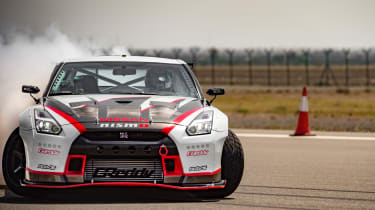 Nissan has set a Guinness World Record for the fastest drift, with a GT-R driven by Japanese drift racer Masato Kawabata. The specially tuned car entered the drift at a speed of 189.49mph, putting it well ahead of the previous record of 135.44mph held by Jakub Przygoński from Poland.

The record was set at Fujairah International Airport in the UAE using a 1361bhp modified Nissan GT-R Nismo. Rear-wheel drive only, the car had originally been tested at Fuji Speedway in Japan and developed by the GReddy Trust. Nissan says it was setup for 'confidence inspiring handling characteristics' - something you'd presumably want while drifting at nearly 190mph. 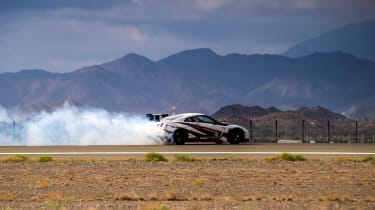 In accordance with Guiness World Record rules, the GT-R only had three chances at breaking the record. GReddy technicians spent three days prior to the event preparing the GT-R Nismo for the 190mph drift, working closely with RAYS who supplied special lightweight wheels for the car. Toyo Tires also provided specially designed drift tyres produced just for the stunt.

>Read our review of the Nissan GT-R Nismo review