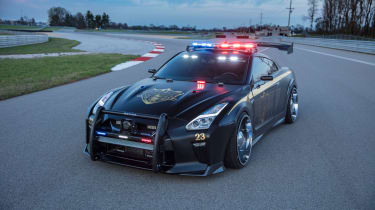 At this year’s New York motor show, Nissan will be showing off special versions of each of its two sports cars - the 370Z and the GT-R. The 2018 model year 370Z will make its first appearance and will wear paint and decals to celebrate 50 years of its Z cars, while a GT-R will make an appearance dolled up to look like a police pursuit vehicle.

We’re used to seeing performance cars being turned into cherry toppers, jam sandwiches, candy cars, or whatever else you might want to call a police car. Over the years everything from a Ford RS200 to a Lamborghini Gallardo has been converted into a panda car. Yet nothing can prepare you for Nissan’s latest creation, Police Pursuit #23 nicknamed Copzilla.

> Read our review of the Nissan GT-R

As the name suggests this highway patrol vehicle is based on Nissan’s GT-R, or Godzilla as it's known to its fans. The four-wheel drive super-coupe looks particularly aggressive thanks to a set of police-issue bars at the front to enable it to perform some offensive driving manoeuvres, if needed.

Just as practical are the many LED lights that litter its exterior. As well as the obligatory roof bar there are eight pulsing lights on the rear, four on each side and 10 on the front. There’s also a matrix strip on the front that is capable of displaying a message to any potential perpetrators, that’s also backed up by a loudspeaker and siren. 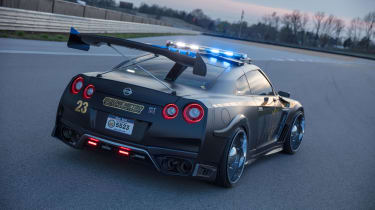 Less useful for a police car are the wider wheel arches, front spoilers and massive roof-mounted rear wing. This extra bodywork isn’t likely to counteract the less-than-aerodynamic lights and nudge-bars, instead they create even more space for lights to be attached. Sort of practical then, but still, you’re unlikely to see huge wings being attached to the US standard issue Crown Victoria police car any time soon.

Having to put up with such dire handling cars, you’d have thought the Five-O would have been content with a standard GT-R. Even so, Copzilla has been enhanced with coilovers and a set of 22-inch wheels designed to look like the steel wheels often found on US police cars. Its engine has been left unchanged, but the GT-R’s V6 puts out 562bhp and 466lb ft of torque, which will be enough to hold its own in any high-speed pursuit. 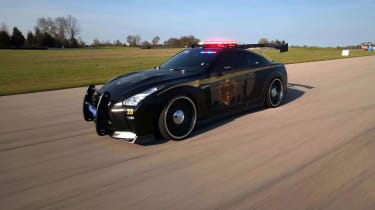 Copzilla’s menacing black paint is complemented by a gold stripe down the side and a shield embellished on the bonnet and doors. The badge is for a fictitious force titled the Skyline Metro Police Department, it’s not only a tribute to the previous GT-R's model name but also celebrates the New York city skyline.

The 370Z Heritage Edition, even with its Chicane Yellow bodywork, black stripes and matching interior trim, looks decidedly tame next to Nissan’s cop car. But spend a little longer inspecting the two-seater sports car and, beyond the superficial Heritage Edition tweaks, you’ll notice there are some small changes to this new 2018 model year car. There are new front and rear lights and dark chrome door handles, while the only mechanical change is a new high-performance Exedy clutch for the manual models. We’re yet to find out if the Heritage Edition 370Z or even just the 2018 model year updates will be available in the UK. 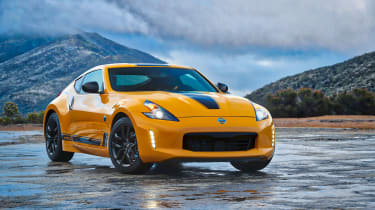