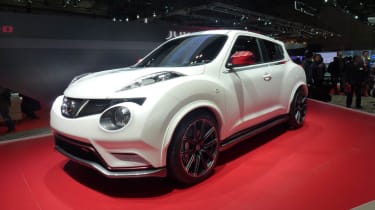 It turns out that the slightly incongruous sight of the Nismo Juke concept that sat on Nissan’s stand at the Tokyo motor show is set to just be the start. Nissan bosses have confirmed that they are planning to use the Nismo motorsports division to become an in-house tuning arm, with plans advanced to introduce Nismo versions of many of the company’s road cars.

The Juke’s presence as a clearly viable concept was a tacit acknowledgement that it is likely to be the first to get the Nismo treatment. As an indication of the new direction it’s hinting at something closer to Renaultsport or Mazdaspeed than BMW’s M-Division or Mercedes’ AMG. The Nismo Juke gets a fairly muscular bodykit, lowered and stiffened suspenson and 19-inch wheels wrapped in some very low-profile rubber. Nissan says that the Juke’s 1.6-litre turbo petrol engine has been tweaked too, although it remains coy about exactly how much by – insiders were hinting at something around the 210bhp mark.

Andy Palmer, Nissan’s product planning supremo, told us that the decision to use Nismo for the road car division was down to the ‘need to tell the story behind the product… Nismo is about truth points behind the excitement.’

He also said that Nismo models would never be about raw horsepower – outputs would be boosted over standard models, but only by 10-20 percent. Nismo is meant to be about handling – with Nissan’s British engineering centre in Cranfield set to be involved in the tuning of UK and European versions.