A hotter version of the Nissan Juke Nismo, called the RS, will be revealed at the LA motor show. 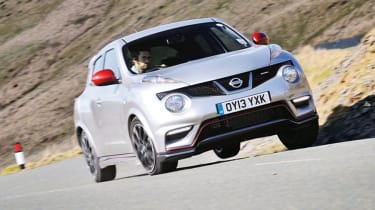 The organisers of the LA motor show have mentioned in a recent press release, that Nissan will be revealing a Juke Nismo RS model at its motor show on 19 November.

No other details have been released, but it is thought that an RS model could be powered by a 230bhp version of the current car’s 1.6-litre turbocharged engine – which is fundamentally the same as the unit used in the Renaultsport Clio 200 Turbo.

It's unlikely to be anywhere near as extreme as the recently produced Juke-R, but will most likely offer a more performance focused setup over the current Nismo, which is significantly stiffer than the standard Juke.

Like the standard Juke Nismo, the RS is expected to be offered with a six-speed manual gearbox and front-wheel drive, or four-wheel drive with a CVT. The standard 197bhp six-speeder manages to hit 62mph in 7.8secs, going onto 134mph, so expect the RS to be marginally quicker than this.