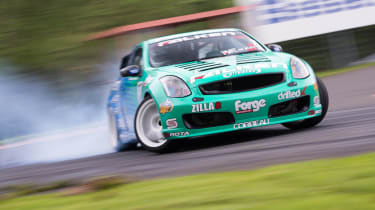 That’s not to say drifting is simple. After the Motofest, Cheshire and I catch up to talk about his car – a car he built himself. I told him how I’d noticed the level of modification the 350GT had received inside and out, with cooling and weight saving clear targets for the changes.

‘It’s an ugly old beast; the arch gaps and stance aren’t perfect, but that’s because it’s for actual performance rather than looks,’ explains Cheshire. ‘The front track is six feet seven inches wide – the width of some lorries – and the rear is six-foot two; we’re running loads of front camber and the back end is setup like a drag car’s.’

Cheshire tells me that the rear wheels are set with close to zero camber because, despite popular belief, drift cars want as much grip as possible. ‘The public’s perception is that you want no grip, but it’s the opposite,’ he says. ‘Running the rears flat to the ground enables a maximum contact patch at all times.’

It’s for this reason that Cheshire and his teammates also run tyres with almost no sidewall stretch, which again appears to go against popular belief. ‘And at the moment I’ve got as much as 64 degrees of steering lock using totally custom steering hubs and knuckles,’ he continues. ‘But because drifting is still relatively new, there’s new technology coming out all of the time. The rate of development is so fast that there’re always new parts offering more steering angle and better traction.’ 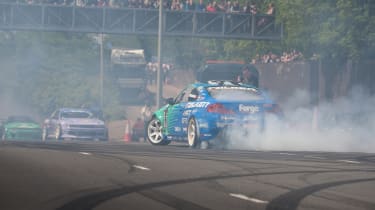 So what about the tyres? Though championship regulations dictate that they must be road legal, why would a professional drift team running a purpose-built drift car want to run rubber that you and I can buy for less than £80 a corner? Falken’s European director, Matt Smith, provides the answer: ‘Drifting demonstrates that our tyres can survive in the harshest of environments. It helps us demonstrate that despite being priced at a less-than-premium cost, it’s a premium tyre’.

The tyres fitted to the team’s cars are Falken Azenis FK453s – the sort of tyre you’d fit to anything from a diesel repmobile to hot hatch. While my passenger experience revealed little of the tyre’s road performance capabilities, I can at least confirm that it can withstand a heck of a lot of abuse.

Some of Team Falken’s competitors run far more track-biased tyres, which, despite being road-legal, provide substantially more grip. Even so, Cheshire and his teammates often rank at the sharp end of the field. ‘We punch above our weight and we make a lot of noise while we’re doing it,’ confirms Smith.

‘We can go through 20 to 24 sets of tyres per weekend, unless it rains, of course – then it’s less,’ adds Cheshire. ‘We run extremely low pressures, around 10 to 12psi at most events, like drag racing cars. We run the rear with very soft dampers and roll-centre correction hubs – it allows the car to squat more and offers better traction.’ 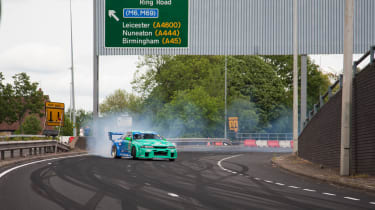 The results of this very aggressive chassis setup are clear to see. ‘We can take [Silverstone’s] Brooklands in fourth gear on the rev limiter; the rear wheels are spinning at about 120mph,’ says Cheshire. ‘If we ask the tyres to do this twice, they’re shot. That’s about 40 seconds of running!’

With all of this in mind, should we be taking drifting seriously? Cheshire answers: ‘It’s a proper motorsport and it is very serious. It takes a lot of passion.’ That’s a ‘yes’ then.

Whatever your thoughts on drifting are, it’s impossible to ignore the standard of work and commitment that goes into building and running a drift car. Clearly the sport is shedding its once amateur image for a professional one, though it might take some time before longstanding fans of motorsport are won over (see Colin Goodwin’s column). But let us not ignore the level of skill that’s required to accurately drift a car with supercar-aping performance, on tyres designed for something much more humble. Fan of drifting or not, anyone who likes motorsport can respect that.