Noble has revealed a convertible prototype version of the M600 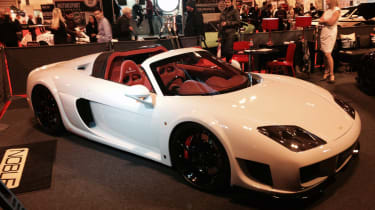 British carmaker Noble has unveiled a prototype version of a potential future M600 convertible at the Autosport International. As an open top version of the brutish supercar, the convertible is also the first Noble to feature a semi-automatic gearbox.

The M600 convertible prototype is powered by the same twinturbo 4.4-litre V8 as the standard M600. This produces 650bhp and 604lb ft of torque, which would enable the drop-top to reach a top speed of over 200mph. For reference, the hard top can touch 225mph.

The gearbox, a six-speed semi-auto with paddle shifters, has been fitted as a single-clutch unit, a decision supposedly made in order to retain some ‘old-school’ sensations  - something modern dual-clutches have arguably lost. It's fitment in the prototype confirms rumours that the hardtop M600 will soon be available with the same gearbox. 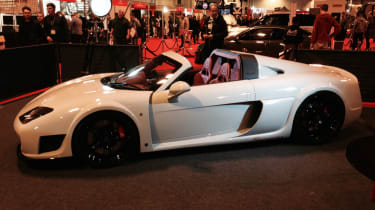 Structurally, the chassis remains largely unchanged, with the standard car’s carbonfibre shell being strong enough to remain rigid despite losing its lid.

Rollover protection has been added to the M600 with raised rollover buldges expanding above the normal swooping rear roofline. Inside, the interior is much the same, with swathes of leather, exposed carbon, aluminium trim and a steering wheel wrapped in Alcantara.

Noble is still unsure as to whether the car will ever enter production, so the response at Autosport could be used to help decide the convertible M600’s fate.