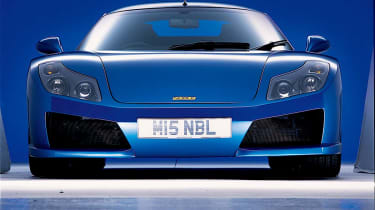 It’s all been a bit quiet on the Noble front of late. The new M15 had an initial flurry of media exposure, including in these pages (091) but has since gone to earth. Now we know why. Lee Noble last month released a statement saying that he has a new financial backer. The mystery business partner is remaining anonymous but replaces David Jones, the chairman of Next.

Thanks to this new cash injection, delivery of the M15 to customers on the waiting list is now promised for early 2007. Not only that, Noble says that as a result of extensive research and development of the new car, it has made ‘significant improvements’ over and above the press prototype.

The styling will remain largely unchanged but it is likely the production car will have more power – and suspension and brakes to match. When we talked to Lee Noble back in issue 091, the power stood at 455bhp but the gearbox was capable of handling up to 650bhp… It should be worth the wait.