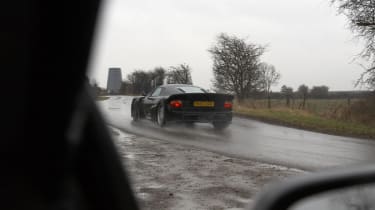 Forget the long-awaited 455bhp M15 – Noble is set to move into supercar territory with the launch of a pair of even lighter, vastly more powerful cars, the M600 and M15C. Both will cost around £100K, feature carbonfibre bodywork and be powered by a newly developed twin-turbo V8 producing a massive 650bhp.

The M600 is a leather-trimmed yet hardcore mid-engined drivers’ car that will have styling elements of the stillborn M14, while the more racer-ish M15C is a pared-back evolution of the M15. With kerb weights of just 1000kg, each model will have a power-to-weight ratio better than a McLaren F1 or Bugatti Veyron, so performance will be mind-blowing.

Noble has been pretty tight-lipped about its plans until now. In February this year it sold the rights to the M12 and M400 to its former US importer, 1G Racing (see box, right), while in late 2006 a new investor, American Peter Dyson, came on board. At this point Noble announced that the M15, revealed in April 2006 and already set to move the Leicestershire-based car maker upmarket with its projected price of £75K, would be redeveloped into an even higher performance car.

It is now clear that this was part of an overall business rethink that sees Noble positioning itself on an even higher and more bespoke level. Production will be just 50 cars per annum, which means that Noble will be building just one M600 or M15C per week.Out go glassfibre and the venerable twin-turbo Ford V6 and in come carbonfibre and a twin-turbo development of the 4.4-litre V8 from the Volvo S80.

‘We looked at all the V8s out there and the Yamaha-designed unit in the Volvo was the best,’ says company founder Lee Noble. ‘It’s incredibly good in terms of size and weight, and with eight cylinders and variable valve timing we could pretty well eliminate turbo lag. We were always going to fit turbos – it’s the Noble way and I like them.’

The engine, developed by Noble itself, has done thousands of hours on the company’s dyno and plenty of miles fitted to a test mule. The V8 will be mated to the Graziano-built six-speed manual gearbox which was developed for the 455bhp M15 and is rated for up to 650bhp.

While the bodies and chassis of the M12 and M400 were built in South Africa by Hi-Tech Automotive and then mated with drivetrains over here, the lower volumes of M600 and M15C mean that they will be wholly built in the UK. The site has yet to be revealed, but it won’t be Noble’s Barwell base.

Although the £100K price tags put the new Nobles in competition with some exceptionally good cars, not least Porsche’s 911 GT3 RS and Turbo, the dynamics of recent Nobles have been very impressive, and Lee Noble is bullish about their prospects. ‘I’ve driven all the rivals,’ he says, ’and although they’re brilliant, none is as light and as powerful as ours.’

Noble expects to have production-standard cars ready for test drives by summer 2008, with the first customer cars being delivered in the autumn.