The sun will be out at this weekend's Battersea Park race. Here's how you can make the most of it

London’s inaugural ePrix looks set to be quite a spectacle. Twenty cars racing around Battersea park with one of the most iconic city skylines as a backdrop will be a sight that London has never seen.

A 1.14 mile loop around the park and a finishing straight on the Thames waterfront sets the scene for the most exciting race in the Formula E calendar. It’s also the concluding race of the season.

Designed by British architect Simon Gibbons, the track will throw up unique challenges to the drivers. Formula E’s circuits have already delivered plentiful unusual surfaces, but Michelin’s specially developed tyres have performed admirably up to this point.

Expect them to do the same here. Even more impressively, the bespoke 18-inch rubber will run the length of the race and perform equally as well in rain or shine, so London’s unpredictable weather shouldn’t be a hindrance.

Held in the centre of London, it’s sure to be a busy event, so we’ve put together a quick survival guide to make sure you get the most out of your Formula E weekend.

You’ll need to get yourself tickets, but unfortunately demand for the event means tickets to watch the race by the trackside have already sold out.

The event’s organisers will be selling tickets for the E Village at the gates, however. While these don’t provide access to any viewing points, you can still soak up the event’s electric atmosphere and watch the race on several giant TV screens. 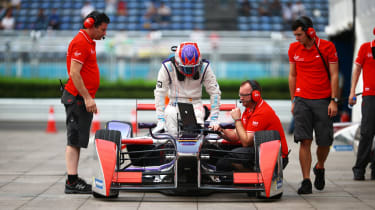 Parking in central London is difficult, so why not take advantage of the capital’s extensive transport network to get you to and from the race?

The underground is your best bet as it’ll avoid the surrounding traffic. A day travel card costs £12 and will get you anywhere in the city. You’ll want to head to Queenstown Road overground station for the quickest point of access to the race.

Got lost? You’ve got Michelin maps and Michelin guides to help you get around. The guides are especially useful, as the sheer variety of restaurants on offer in London mean you could easily miss out on the best eats without some insider knowledge.

London is home to some of the best hotels in the world. You can choose from a variety of different places and price ranges. Since the city is so well connected, don’t be afraid to stay a few miles from Battersea - the extra distance could save you a lot of money.

The centre of Battersea Park has a specially-built ‘E Village’ for the event where you can explore the entire world of Formula E. You can get up close with the cars and learn about the tyre technology Michelin has used to keep the race cars both environmentally friendly and quick around the track. 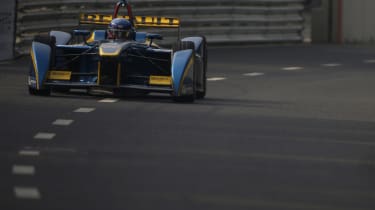 The riverside viewing platform along the finish straight will likely offer the best vantage point to watch the racing. Offering up views of London’s waterfront, as well as the cars themselves, it's your best chance to take some atmospheric photos.

Alternatively, seating in Zone B will give you views of the cars under heavy braking following the track’s other long straight. It's sure to be one of the best spots to catch the drivers outbraking their rivals into a tight corner.

Otherwise, if you can’t get into the track, the entire Formula E race itself will be live streamed on the official FIA Formula E website.