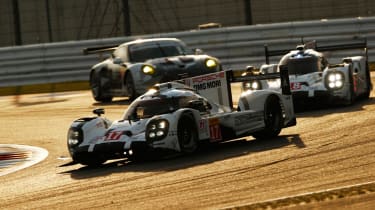 For fans of pure racing, there are few better international race series than the World Endurance Championship. With some of the fastest drivers driving some of the world's most advanced racing cars, there's no shortage of action. But what really sets the championship apart from the likes of Formula 1, is the amount of variety each race offers - cars that are barely slower than F1 cars circulate tracks with cars based on road-going models.

It certainly makes for a fantastic spectacle, and the last race at Fuji was a great example of just that. We look back at the eventful round and consider its effects on the rest of the 2015 championship - with input from the LMP1 class's sole tyre supplier, Michelin. 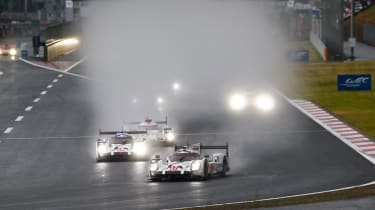 Porsche secured the perfect result at the 6 Hours of Fuji as its two cars converted front row grid slots into first and second positions in the race.

But it was far from a lights-to-flag victory, because adverse conditions meant the first 40 minutes of the race were spent behind the safety car. Once the stewards determined it was safe enough to commence racing, the two chasing Audis wasted no time in fighting through to the front, both R18 e-tron quattro drivers clearly benefitting from their cars’ higher downforce in the slippery conditions.

The first Porsche 919 Hybrid, car 17 of Timo Bernhard, Mark Webber and Brendon Hartley, was left to fight it out with the sister 919 of Romain Dumas, Marc Lieb and Neel Jani and the pair of Toyota TS 040-Hybrids. But as the rain eased and the track slowly dried, the Porsches began to show the raw pace they’d demonstrated in qualifying the day before, leaving the Japanese cars behind and shrinking the gap to the race leaders. 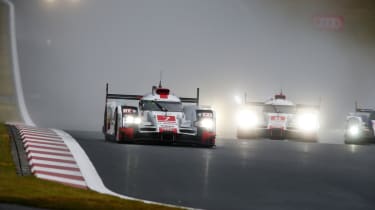 Now running on Michelin’s Hybrid race tyre, the Porsches fought hard with both Audis to eventually retake the leading positions, reclaiming the order they started in. And as the track dried further, the cars switched to slicks; in these conditions the Porsches were comfortably fastest and pulled out a comfortable gap over their competitors before taking the win.

The race’s result cements that the Porsche 919 Hybrid is the car to beat in 2015’s WEC, but Audi’s early charge in the wet confirms each of the LMP1 class’s cars exhibits different talents on different tyres. ‘We used the complete range of Michelin endurance racing tyres available for the 6 Hours of Fuji,’ said Jérôme Mondain, manager of Michelin’s FIA WEC programme. ‘After initially fitting rain tyres, then the Michelin Hybrid, the LMP1 teams switched to soft low temperature and soft high temperature slicks depending on their respective strategies.’ 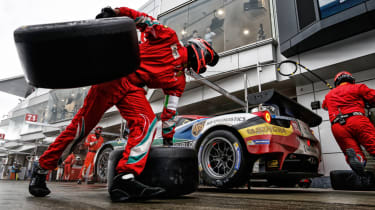 Further down the field in the LM GTE class, the number 51 Ferrari 458 Italia of AF Corse led home the number 71 Porsche 911 RSR of Porsche Team Manthey, while the number 77 911 RSR of Dempsey-Proton Racing took the GTE Am win.

‘I would also like to underline that the LM GTE Pro’s Ferrari 458 Italias [AF Corse] and Porsche 911 RSRs [Porsche Team Manthey] triple stinted on the same rain tyres at the height of their battle,’ added Mondain. ‘The Porsches even ran them for three stints and 12 laps! During this sequence of the race, the performance of these cars was very consistent and that’s quite remarkable because their technical characteristics are very different.’ 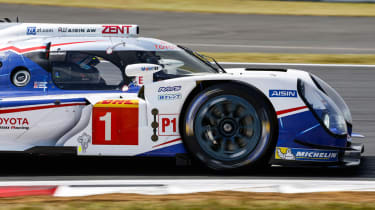 There are just two rounds remaining in the 2015 season - Shanghai and Bahrain. Both circuits mix fast flowing corners that reward high downforce setups, and long straights that require strong engine performance. Given the last result it would be easy to label Porsche as a firm favourite - the number 17 919 of Bernard, Webber and Hartley now leads the Drivers' Championship by one point; the team is 53 points ahead of Audi in the Constructors' - but Audi has demonstrated that in anything less than optimal conditions its cars can contend for the win. And Toyota won both of these races last year, so if rain decides to fall could the Japanese team mount a surprise charge?

One thing's for certain, these are two races worth watching. We'll know more when the WEC circus heads to Shanghai, China, for the next round on November 1.