'Well, I mean, winning is so un-British isn't it?'

"There are things we Brits do very well, but getting behind our sportspeople is not one of them" says Porter

For reasons too complicated to explain, I spent the Monaco Grand Prix in actual Monaco, watching the race from a yacht in the harbour with about 50 Australians. I know, I know, I’m showing off. About the yacht bit, obviously. Not the bit about being surrounded by 50 Australians. I doubt that’s an especially impressive boast, especially if you live in Australia.

Nonetheless, 50 Australians turns out to be a brilliant thing to have around you when poncing about on a big boat at the Monaco Grand Prix. Can you imagine the potential horrors of being surrounded by 50 well-to-do supercar enthusiasts from the UK? There’s an odds-on risk that at least some of them would have that self-made, Mansellian sense of entitlement that would lead to all manner of moaning about things that were too hot or too cold or too unlike the way they do it in Sutton Coldfield. Australians, I soon discovered, are not like this. Australians fetch up to a boat in Monaco and think to themselves: this is BRILLIANT.

They were right. And not once during the weekend did that easy-going, happy-to-be-here attitude wane or wear thin. On Saturday it was very sunny and hot, which made the Aussies very happy because it brought conditions up to their natural operating temperature and also the bar was open. The next day, sadly, it rained. But the Aussies didn’t mind because, hey, they were still in Monte Carlo. And also because the bar was still open. 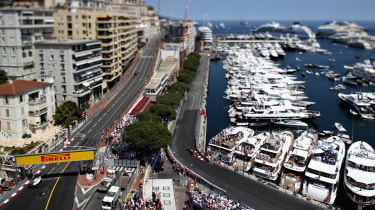 I really liked the cheery attitude of my Australian yacht mates. And I really liked their passion for their man out on the track, Daniel Ricciardo. Except they didn’t call him Daniel Ricciardo. Without exception, all the Aussies referred to him throughout the weekend as Dan. Mistakenly, I thought Australian law required you to take someone’s name and add an ‘o’ to the end of it. Hence, Shane-o, Rob-o, Her Majesty Queen Liz-o, and so on. Not so here. Maybe it’s because his surname already ends in an ‘o’ and they didn’t want to over-egg things. So ‘Dan’ it is. ‘Dan looks good for qualifying’, ‘I hope Dan can find some pace here’, ‘Dan’s going out for another run’. Every Australian spoke with warmth and affection for ‘Dan’, but also like they knew him. Maybe it’s because there aren’t that many people in Australia, especially once you take out all the ones who’ve moved to London. Perhaps that makes everyone feel more like a part of a small community. I don’t know.

Maybe it’s Australia’s natural matey informality combined with the country’s inherent and extremely deep love of sport. My brother lived there for a bit and he swore that the evening news started with 30 seconds of disinterested mumbling in which the presenter rushed through headlines about huge natural disasters, assassination attempts on the prime minister and news of an alien invasion in Japan, followed by a palpable change in tone and enthusiasm as they said, ‘And now… sport!’ the details of which would take care of the other 29 minutes of air time. So sports people are real heroes in Australia, but also your mates. Hence ‘Dan’.

I’m only guessing all of this stuff. What really struck me was the melding of mateyness and reverence all bundled up in genuine and unswerving support for someone bravely representing their nation on the world stage. And then I started to think, why can’t we do that in Britain? We’ve got Lewis Hamilton, Jenson Button and Jolyon Palmer out there flying the Union flag and yet can we, as a nation, find it in our hearts to lend the sort of unswerving support that comes so naturally to a bunch of Aussies? It doesn’t feel like it. We get behind our sports people and then fall out of love with them for some perceived failing, like being too hot or too cold or too unlike the way things are done in Sutton Coldfield. Or, more usually, for the crime of being too successful. Well, I mean, winning is so un-British isn’t it? We moan and snipe where Australians just get behind someone for representing them. Of course, in the case of Daniel Ricciardo, it must help that he’s not only a very good driver but also a very good bloke. Even so, I thought we could learn from the sun ‘n’ shrimp good vibes that seem to come as standard from Oz.

I was so wrapped up in this cheery optimism that for the time I was on the yacht, a part of me was rooting for ‘Dan’ over Hamilton. That’s how delightful and infectious Aussie enthusiasm can be. I think I actually wanted to be Australian. And not just because we were in Monte Carlo and the bar was open.

Richard is evo's longest-serving columnist and the keyboard behind sniffpetrol.com @sniffpetrol