Exclusive: The Huayra will use a bespoke gearbox developed by racing specialists Xtrac. More details here. 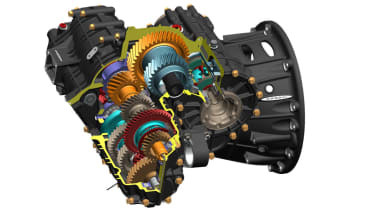 We didn’t have room for it in the magazine in the end, but while trying to give you as many details as we could about the new Pagani Huayra, I went to see Xtrac, the firm responsible for its sequential manual gearbox.

Xtrac are legends in the transmission industry. Almost every car on the F1 grid uses its gearbox internals, it’s the exclusive gearbox supplier to the BTCC, cars with its gearboxes and diffs have won everything from Paris Dakar to Le Mans. They’re number one.

Hence why Pagani turned to them in 2008 to develop the gearbox for the Zonda R, and then a little later Pagani and Xtrac hooked up for the C9/Huayra project.

Xtrac is starting to branch out into road car gearboxes and the new Pagani uses a seven-speed sequential transverse gearbox with a bespoke casing made from aerospace grade aluminium alloy.

The whole assembly is remarkably compact, the idea being to keep the weight as far forward as possible, thus improving weight distribution and reducing the polar moment of inertia. According to Adrian Moore, Xtrac’s technical director, ‘there are four more main benefits [to the transverse packaging], it allows space for the exhaust, rear crash structure, underfloor diffuser and allows the designers more styling flexibility.’

As yet there’s no word on how fast it’ll change gear, but Xtrac admitted they have altered the gearing to allow the Huayra to hit 60mph in first gear. It will also have an auto function for when the driver prefers to loaf around.

Two cars have been testing with the gearbox since last June and at the end of January testing was being carried out at Nardo to calibrate the gearbox. We’ll let you know as soon as we have hard figures – and of course the all-important performance data.