Pagani has announced it has 85 orders for the Huayra supercar, with production of customer cars already started 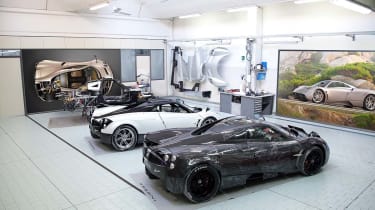 Pagani has announced it has 85 confirmed orders for the new Huayra, with production of customer cars already under way. The company is expecting to deliver 25 of the new mega-car in 2012, with a further 40 cars following in 2013.

Interestingly, and in proof of the changing nature of the supercar market, many of the initial orders have come from emerging markets, including China and India. More established markets are also doing well, and in the last 12 months Pagana has opened new dealerships in London (H R Owen), LA, Miami and San Francisco – but also Saudi Arabia, Chile, Singapore and Thailand.

The Huayra is priced at849,500 Euros, plus taxes, working out as an ‘on the road’ price of £850,000 in the UK. Pagani expects the US to be a big market for the Huayra, but the car’s launch there has been delayed until 2013 so that the company can do the development work necessary to meet safety ratings. The company claims the Huayra will have the highest US safety rating, as well as meeting California’s strict emissions standard.

The European homologation has been completed and Pagani tells us the official CO2 rating for the Huayra on the combined cycle is 343g/km, which – although unlikely to win any awards from Greenpeace – compares well to rival supercars like the Lamborghini Aventador (398g/km) and Bugatti Veyron (596g/km).

To meet demand for the Huayra, Pagani has purchased another industrial unit close, giving an extra 40 percent of floor area. Work is due to commence soon on the new production facility, but in the meantime the current factory will continue to be the company’s creative and R&D centre, while the new facility will house all Huayra production, as well as the sales offices, after sales, storage for owner’s cars and a small Pagani museum.

Finally, Pagani has announced that it will be building five more special Zonda R models in 2012, bringing the total build to fifteen cars. More details to follow shortly.