Pagani tyres developed at the Nurburgring

The new Huayra has been at the 'Ring testing its specially-developed Pirelli PzeroTM Corsa tyres. 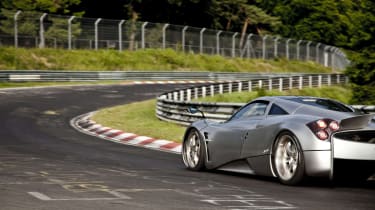 The Pagani Huayra has been at the Nürburgring, testing the Pirelli PzeroTM Corsa tyres, a new tyre that was developed by Pirelli for the new Pagani. Wearing the new rubber, Pagani pitted the Huayra against a Zonda R wearing slick tyres.

Pirelli says it was trying to replicate the balance and progression that is offered by the Zonda R around the Nürburgring, as well as the high-speed ability - and after a test by company founder Horacio Pagani pleased with the results.

On track, the new Pagani was capable of up to 1.66 lateral G-force, a figure rarely seen outside of motorsport, although no lap official time has yet been released.

Pirelli has its own research and development facility near to the Nordschleife, which is where most of the development work for Pirelli high performance tyres in carried out.